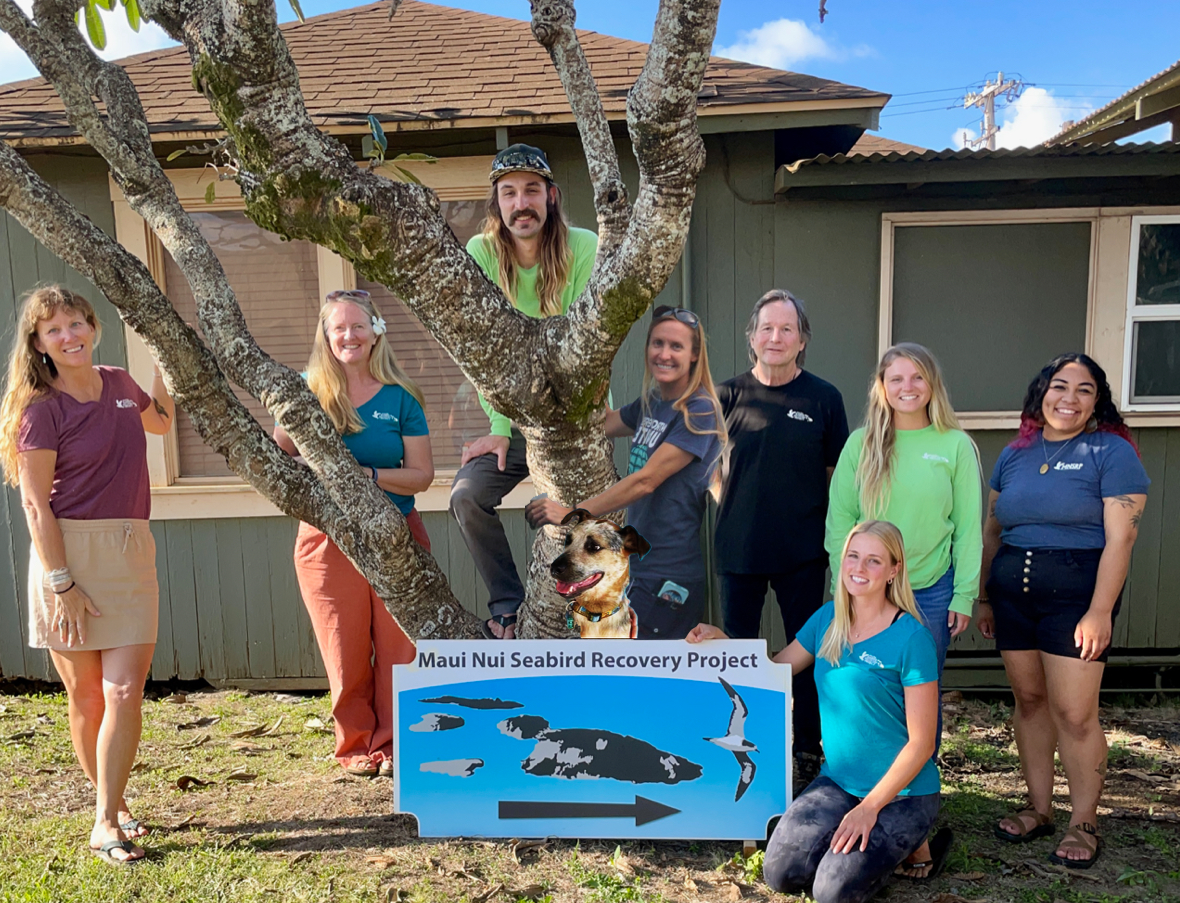 Jay Penniman earned a B.S. at Portland State University (Oregon) in 1977. He has worked as an independent contractor doing forestry, wildlife and vegetation surveys, management and assessment. At the Point Reyes Bird Observatory, he was employed as a biologist on South East Farallon Island, 26 miles west of San Francisco. There he was a member of the team of biologists who ran the remote research station monitoring 13 breeding bird species and 4 marine mammal species. He also performed at-sea surveys for seabirds and marine mammals in the near and offshore waters of the northwest coast of North America. Since 2006 he has worked for the Pacific Cooperative Studies Unit of the University of Hawaii managing the Maui Nui Seabird Recovery Project. When not recovering and rescuing seabirds Jay enjoys bird watching, reading, gardening, cooking and walking. Jenni is a broad-spectrum ecologist with experience working across diverse environments.  Before joining the Maui Nui Seabird team, she facilitated laboratory and field based research at universities and in private industry.  Her bird history includes monitoring shorebirds on the eastern seaboard and endangered flycatchers in the desert southwest, and she is thrilled to contribute to the conservation of seabirds in Hawai’i.  Jenni has Master’s degrees in both biology and GIS, and integrates spatial analyses and database management with sound, fundamental science to support the team. In her free time she’ll hike, read, travel, or just wander around and collect rocks and plants.  She loves the Colorado River and the Grand Canyon and continues her pursuit to complete all of its named trails and routes (and whatever unnamed ones she may come across). Martin is a 2010 Lewis & Clark College graduate with a B.A. in Environmental Studies and Hispanic Studies. He is committed to the liberal arts ethos, and has sought diverse career experience within the field of conservation biology. Beginning with AmeriCorps, he led bilingual conservation crews in Utah, and did Spanish-language education programming at the Tahoe Environmental Research Center. He was introduced to wild bird conservation by the Institute for Bird Populations, with whom he spent four seasons doing multi-species point counts and surveying for Black-backed woodpeckers in the Sierra Nevada. He also made time to do subalpine botany and forestry with the North Coast and Cascades I & M Network Network, as well as fisheries and wildlife biology at Grand Canyon National Park. After many seasonal migrations, following biology work all over the mainland, Martin is excited to join MNSRP here in Maui Nui, where he will contribute to the ongoing efforts to conserve native Hawaiian wildlife. Emily began her conservation efforts in Alabama with the U.S. Fish & Wildlife Service, helping to complete the Alabama Coastal Birding Trail. In 2002 Emily started her fieldwork in Hawaii on the slopes of Mauna Kea with the U.S. Geological Survey -BRD, on the Palila Restoration Project.  Since relocating to Maui, she has assisted in field studies through the University of Hawaii with the Maui Parrotbill and has immersed herself throughout Haleakalā National Park. First as a Park Ranger, and now as an advocate and enthusiast. Her love of nature began in the cold climate of Minnesota, and has grown exponentially while living aloha with her beloved family. Emily’s primary goals are protecting native species and habitats, exploring, and educating others about nature. She is happy in her role, Community Outreach Liaison at the Maui Nui Seabird Recovery Project. Skye Anderson earned a B.S. at the University of Otago (New Zealand) in 2017, majoring in Zoology and minoring in Statistics. In 2018 she designed and carried out a study for an Honors year at University in a remote area of the South Island of New Zealand. Her study demonstrated the negative effects of past livestock practices on native invertebrate communities in upland streams, and the implications for restoration efforts. Her paper was subsequently published in an international scientific journal, Environmental Management. Skye’s interest in ornithology began when she spent a month volunteering with Department of Conservation rangers in Nelson Lakes National Park in 2019. She was working to maintain and restore populations of endangered endemic birds in this area such as kaka, kea and the great spotted kiwi. Then in 2020 she was employed by the San Diego Zoo to work as a seasonal research assistant at their research center on Maui; the Maui Bird Conservation Center (MBCC). Her role at MBCC was animal husbandry, monitoring bird behavior, and keeping detailed and accurate records. In addition to the day to day care of the birds, she helped conduct research projects that involve data collection, input, analysis and reporting. Skye’s love for the native flora and fauna of Hawaii has continued to grow and so has her passion to work in conservation on Maui and she is very excited to be a part of the MNSRP team. Cheryl King has a Bachelor’s of Science degree in biology/psychology from Southampton College of Long Island University and a Master’s of Science degree in marine biology from Nova Southeastern University Oceanographic Center. Being on research teams in South Carolina, New York, Florida, Costa Rica, The Caribbean, Belize, Australia, Papahānaumokuākea Marine National Monument, Cocos Island National Park, and Palmyra Atoll National Wildlife Refuge has significantly enriched her background experiences and inspired her love of being surrounded by seabirds in wild places. Although she is interested in everything ocean-related, she has specialized in Hawaiian endangered species research, rescue and management for the last 20+ years. She has developed a deep passion for ocean conservation, especially for sea turtles while working closely with them since her first sea turtle job in 1996. She runs the statewide photo-ID catalog for Hawaiian hawksbills (www.Hihawksbills.org) and her marine debris research and cleanup project can be viewed here: www.SHARKastics.org. Mariah Rivera earned her Bachelor of Science in Wildlife and Fisheries Biology with a minor in Zoology from the University of Vermont in 2021. As a student, Mariah held multiple internships pertaining to land management and animal husbandry. Her time spent with CT’s Beardsley Zoo as an Education intern established her interest in communicating environmental topics to the public and participating in conservation field work. Upon graduating Mariah returned to CT’s Beardsley Zoo as a Seasonal Educator and Assistant Coordinator for the Zoo Career Explorers program. In this role, Mariah spent her days teaching high school volunteers about career opportunities in the zoological field. When she wasn’t working with the volunteers she was catching and tagging Monarch butterflies as a part of a citizen science study with Monarch Watch. These experiences helped Mariah realize she wanted to continue to work on conservation projects that use research to actively manage threatened wildlife species. She is excited to do just that in her role with Maui Nui Seabird Recovery Project for the 2021-2022 Kupu term. I was born and raised on the beautiful island of Maui and have a strong passion for outdoor activities such as hunting, fishing and diving. Lately, I have developed a whole new level of appreciation and respect for Hawaii’s native species. The seabirds of Hawaii have gained my special interest due to the fact that they are the ones that helped with the formation of the Hawaiian islands and the very ground that we stand on. My education includes graduating from King Kekaulike High School (May 2016) and the University of Hawaii Maui College with an Associate in Applied Science in Liberal Arts (May 2020) and an Associate in Applied Science in Administration of Justice Studies (December 2021). I had the pleasure of doing some volunteer work with MNSRP while I was in college and within the first few days of volunteering I saw the call for action in the conservation of seabirds. A personal goal of mine would be to take part and do all I can to help protect, preserve and further learn about not only seabirds and the places they call home, but also Hawaii’s special ecosystems from Mauka to Makai. Working with the amazing crew here at MNSRP and like minded conservationists has instilled not only great memories, but ones that will last a lifetime. Dr. David Duffy is a professor at the University of Hawaii at Manoa and is the Principal Investigator for Maui Nui Seabird Recovery Project. He is the director of the Pacific Cooperative Studies Unit. For more information, please visit http://www.botany.hawaii.edu/facultypages/david_duffy.htm After receiving his B.S. from the University of Michigan in Ann Arbor, Fern earned two graduate degrees in Zoology from The Free University of (West) Berlin.  Fern worked for 12 years as the State Aviculturist for the Captive Propagation of endangered Hawaiian birds. In 1996 Fern became the Wildlife Biologist for the Hawai‘i Department of Land and Natural Resources, Division of Forestry and Wildlife on Maui, working with native Hawaiian waterbirds, forest birds, seabirds, invertebrates, plants, and non-native vertebrates. Fern now works as the NEPM Program Manager, Maui District. NEPM protects the State’s most diverse, pristine, unique remaining natural landscapes and ecosystems, with all the native flora and fauna they house. Fern is responsible for the original conception and staffing of Maui Nui Seabird Recovery Project, which fulfills seabird management and research mandates of the Division of Forestry & Wildlife. 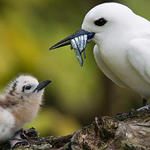